To support FreeNAS,  the following upgrades were added to the base SuperMicro 2U chassis.   The approximate Ebay prices are shown.

Since PCIe to NVME U.2 to adapters don’t support low profile cards needed for this server,  I’ve selected a PCIe to M.2 adapter from SuperMicro.

Alternatively a Unicaca ANU22PE08 NVME U.2 SFF8643 to SFF8639 NVMe U.2 with Cable Dual Port NVMe might make for easier cable connections.

You’ll notice that these disk adapters are not full controllers.   The NVMe interface is vastly simplified from SCSI and the disks are driven directly from the CPU

A separate power connection is required for each drive.

For the ARC cache and ZIL Slog devices,  I’m using U.2 NVMe SSD’s.  Both of these are Data-center drives,  with power failure protection.  The P3700 has extreme write endurance, and 0.2 ms latency.

I sandwiched them together with spacers for better air flow as there are no slots in this server for NVMe drives.

Here are the two NVMe drives sandwiched together with U.2 adapter cables.  Two power connections visible on the right.

The drives sit on a thin sheet of cardboard (for now) and get plenty of airflow in this location of the server.  Two power cables run up front under the case fans, and get power from a 4 pin moles connector near the SCSI backplane.

In the picture above the M.2 adapter card is located on the rightmost PCIe slot which is an X8 slot.   To make this work for the two drives on the M.2 card, the BIOS must be changed (bifurcated) so the indicated slot becomes split into two X4, X4   lanes ( instead of a single X8 ).

I also purchased the following since this used server may be in use for a while. 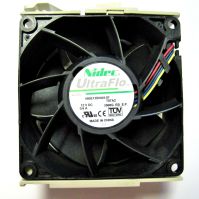 One thought on “2020 FreeNAS component upgrades”